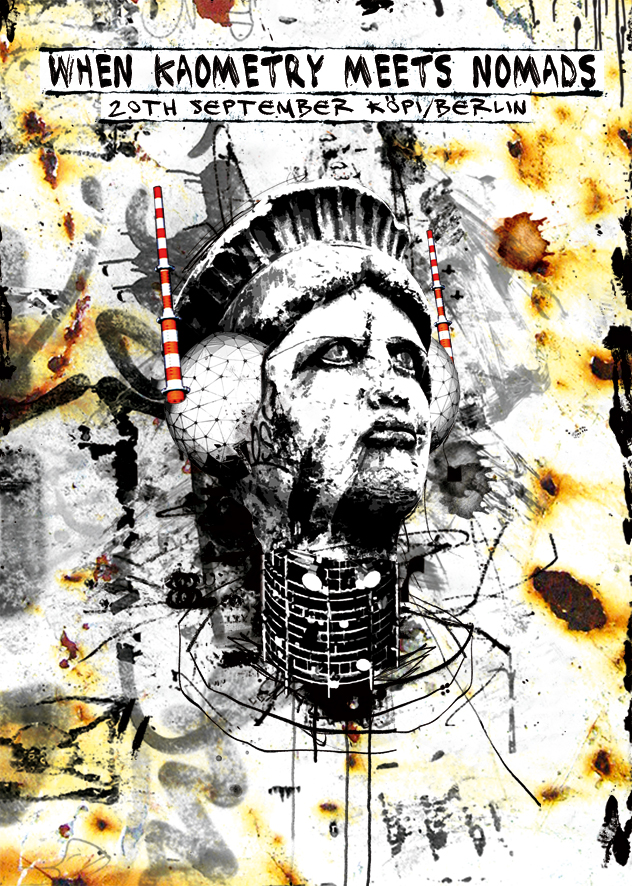 LLamatron
Originally from the Breakcore scene, LLamatron is now claiming the Warstep term by producing a non-conventional hard dubstep music, savage and chaotic at the same time.
After a first EP, Mirror of War, on Accomodus, he joined the Peace Off label where his second EP, Ave Llama, came to life. Last fall, he started a new project with UK artist Gore Tech, and finished the soon-to-be-released Warhound EP on Rotator’s label.
His stunning rhythms and saturated bass will not leave you cold-hearted, but instead insufflate you a strong insane will to destroy your neighbor. enjoy life! – or survival?
https://soundcloud.com/llamatron

Johnny Sideways
After making an impact on the UK’s underground scene around the turn of the century, Johnny made his vinyl début in 2003 on acid techno label Dirtbomb records, though by this time was already developing the harder, breakbeat infused tekno sound he would become renowned for, taking in influences from Hardcore Techno and the European Tribe/Hardtek sounds he was playing while DJ’ing for the legendary Desert Storm Soundsystem.
In 2005 he formed his own label Kaotek Wreckords, as an outlet for the hybrid sounds he and others were producing. Now having played countless livesets in destinations all over Europe, and a back catalogue spanning 10 years on labels such as Tekiteazy, Electrokanibal, Absolute Rhythm and more, Johnny Sideways chews up and spits out genres into a living wall of sound..improvised, upfront and engaging..a purists nightmare..and devastating on the dancefloor.
https://soundcloud.com/johnnysideways

Stazma The Junglechrist
If Breakcore is dead, then Stazma the Junglechrist is the resurrection!
Hailing from the same French stock as Monster X, Rotator and the infamous Peace Off imprint, Julien Guillot has been smashing up raves all across Europe since his first release on Peace Off in 2008 and is showing no signs of slowing down.
Having taken the early breakcore ethos of genre mashing and amen splicing, Julien delivers his sound of rave, gabber, jungle and dub with a modern, tight production that seems synonymous with the French these days.
As well as making a name for himself with releases on Meganeural, Structural Damage and Peace Off, it is Stazma’s live show which displays his work best. A frenetic, yet finely tuned assault on the senses.
“It’s really very energetic, efficient and has all the elements to both kick out your sissy friends out of the club and make the rest party till late after dawn. Stormy, ravy breakcore.” Nic (Ad Noiseam)
https://soundcloud.com/stazma-the-junglechrist
https://soundcloud.com/bankizz_label/stazma-bankizzs-frozen
http://www.facebook.com/StazmaTheJunglechrist

Xeroderman
Young belgian breakcore/IDM producer, Xeroderman started out in 2008.
Of influences going from the punk hardcore to the classical music, he participates in several compilations, spotted, among others, by labels Mozyk and Peace Off, and should soon bring out his first EP soon on Kaometry.
He’s slowly making his name and a place in the middle, and we can certainly believe that it is one of the most promising figures of the Belgian breakcore, to follow, thus, without moderation!
https://soundcloud.com/xeroderman